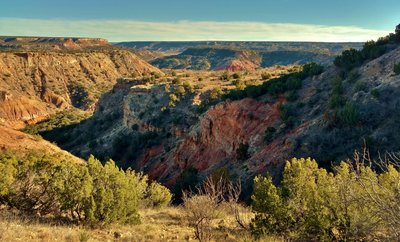 Of the few natural parks in the Texas Panhandle, the most well-known and widely-visited is Palo Duro Canyon State Park. Palo Duro sits in the heart of the high plains and is a welcome change of topography in an otherwise flat region. There are a handful of day hike trails in the canyon, with difficulty levels ranging from the most mild to relatively difficult. All species of day hikers are looking for something in their trips–a leisurely stretch of the legs, awesome vistas, or challenging climbs. In the Palo Duro Canyon, the CCC Trail offers all of these things.

The CCC trail in Palo Duro Canyon, (so named for the Civilian Conservation Corps workers who built and used it in the 1930s) offers day-hikers a change in scenery and altitude, as well as a varying level of difficulty. Unlike other trails in the park, the CCC trail is limited to foot traffic only. Though it is not the most popular trail in the park, the CCC Trail has a lot to offer the day hiker.

Visitors have the opportunity to visit several distinct environments of the canyon on this trail. Grassy mesas, densely wooded juniper and cottonwood groves, and stony, fjord-like outcroppings are all elements of the CCC trail, and can be accessed within minutes of parking your car.

The trailhead is at the North side of the visitor center parking lot, and is clearly marked. The trail terminates at the parking lot of the Pioneer Amphitheater. A hiker can start at either of the two locations, and parking is plentiful on both ends. If traveling with a group, a non-hiker can easily drop his or her friends off on either parking lot, and collect them at the opposite end.

According to the Palo Duro Canyon State Park map, the trail is one-and-one-half miles, one-way. At only three miles round-trip, the CCC Trail may seem insufficient for the day hiker, but depending on what you have in mind, a picnic or a workout, this trail can satisfy your needs. Leaving from the visitor center end of the trail, the first half of the path is an easy, peaceful walk around the Northern edge of the canyon. In this first leg of the hike, visitors cross stone bridges the Civilian Conservation Corps built almost eighty years ago. This is also where the first of two rest benches is located. For birdwatchers, this is the best spot on the trail.

Hikers are then led out of a shallow, wooded gulley and up onto a rocky outcrop in the side of the canyon wall. Those who suffer easily from vertigo may wish to keep their distance from the ledge, while those brave enough can approach the wind-weathered sedimentary rock jutting from the North rim of the canyon.

A look down reminds the hiker that at this point in the trail, that there’s nothing but air and mesquite bushes between you and the canyon floor. The other trails in Palo Duro Canyon are beaten paths through the canyon floor, forcing visitors to look up at the scenery. The CCC Trail is in the sky, and offers a panoramic view of what erosion can do on the high plains. The shade here is minimal, but the view and excitement are sufficient compensation for a little sun.

The trail continues on a gradual curve across the top of a geological formation and heads West toward the Pioneer Amphitheater, where the outdoor musical drama TEXAS is performed. This section of the trail consists of open mesas on top of geological formations left behind by erosion, and each mesa is connected to another a land bridge.

The second rest bench is just up the trail from these land bridges. For those seeking only a change of scenery and a calm walk in nature, this is the end of the trail. Hikers looking for a more demanding excursion should forge on. The route quickly develops into a series of steep switchbacks and sharp declines. Going down isn’t bad. Coming up is another story.

Hikers should take plenty of water, especially during the warmer months, so bring your Nalgene. A hat, sunglasses and sunscreen are highly recommended, as much of the trail is not under the shade of any vegetation. The evening is the best time to experience this trail. The inviting evening temperatures, and a chance to catch a West Texas sunset is an opportunity any day hiker would regret passing up.