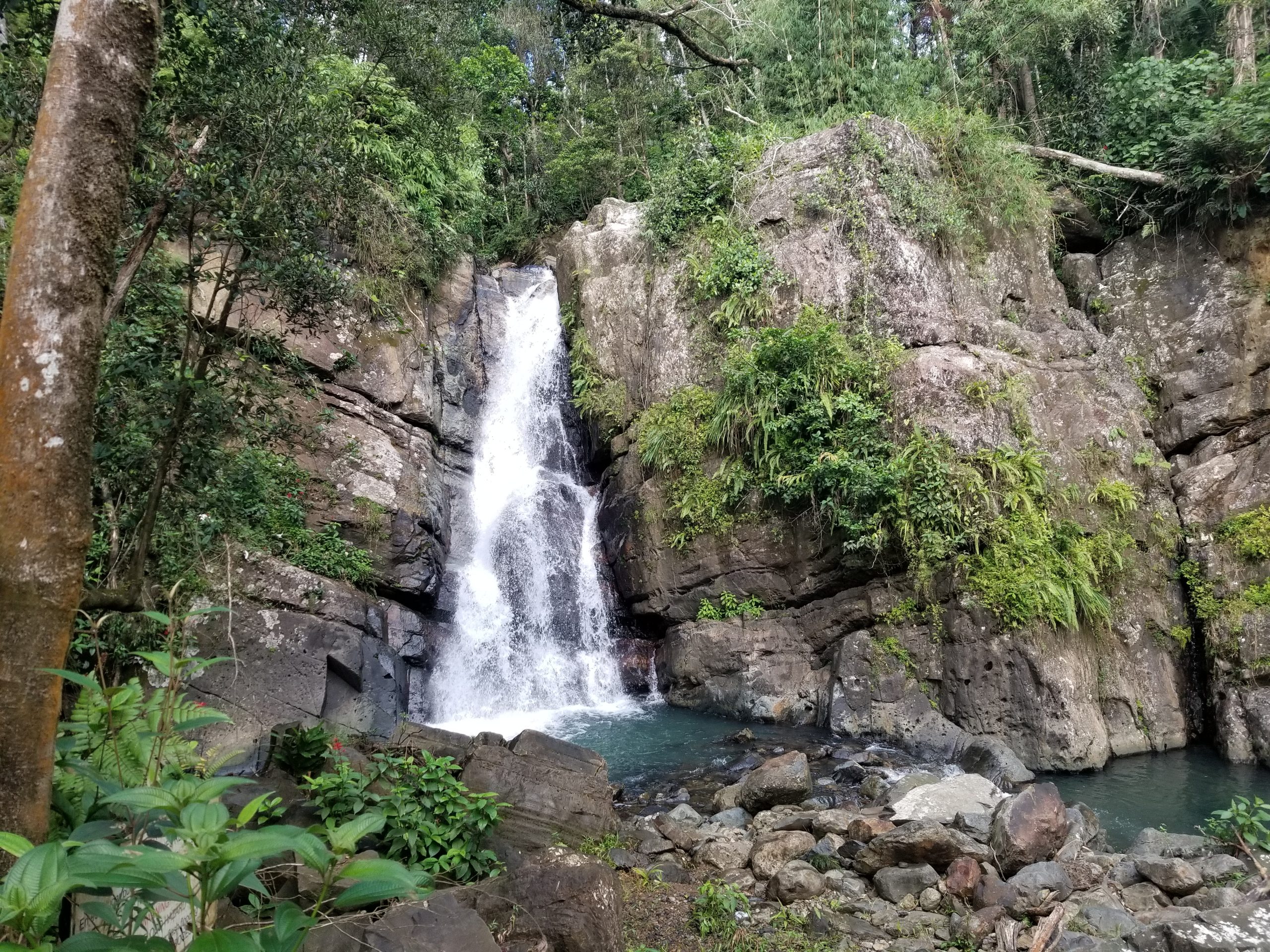 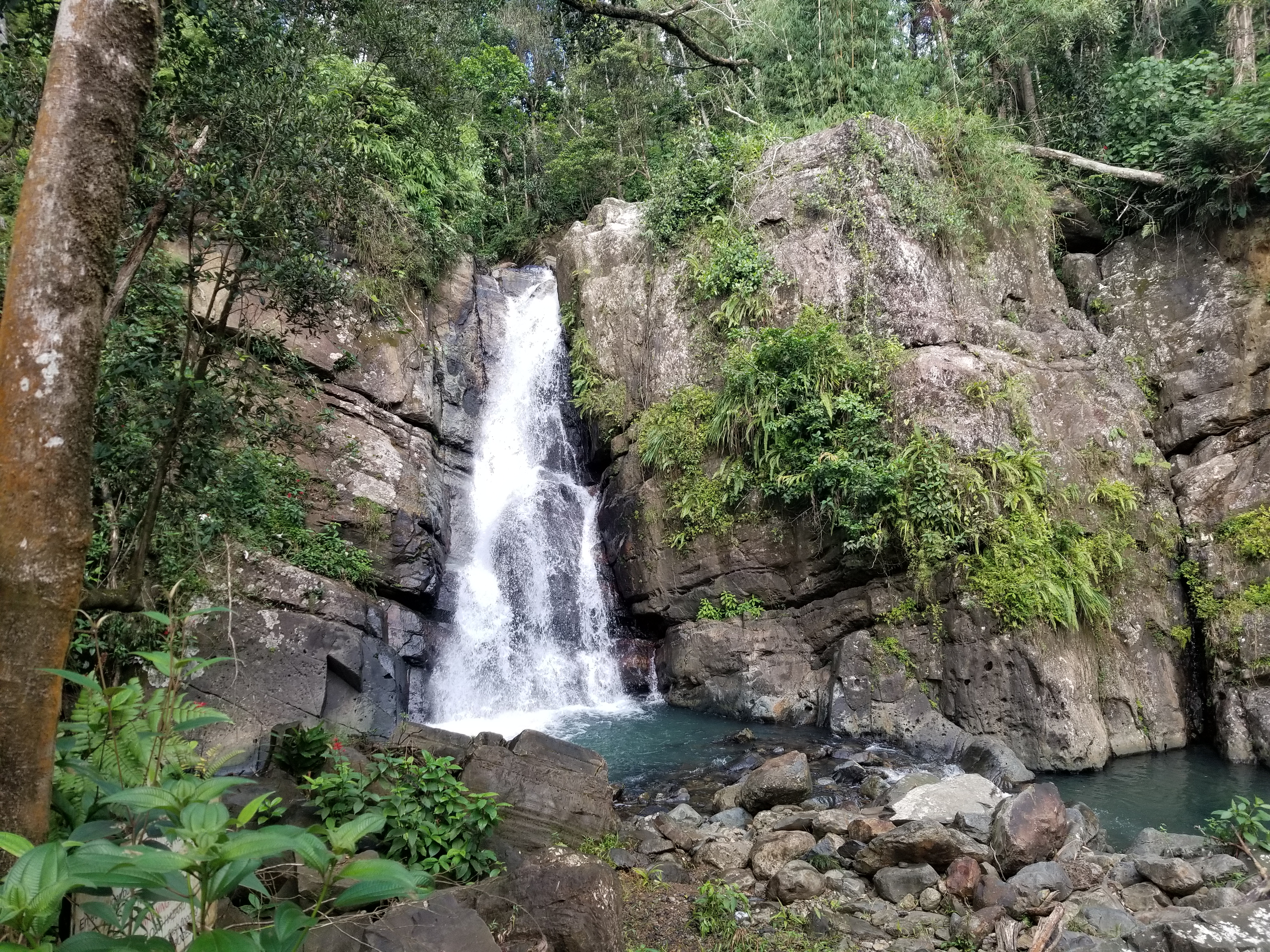 My husband Bill and I spent four nights in San Juan, Puerto Rico last month before we boarded a cruise. Since neither of us had ever been to Puerto Rico before, I did some research before we made the trip. One of the places I wanted to see the most during the days before our cruise was El Yunque, Puerto Rico’s rainforest.

Bill and I rented a car and drove to El Yunque, which is located about an hour east of San Juan. We arrived at the rainforest just in time for lunch. There was a roadside stand near what has to be El Yunque’s most popular trail, the hike to La Mina Falls. While we ate barbecue in the rain under an umbrella, we heard tourist after tourist ask the grillmaster where La Mina was. And the very patient grillmaster told each and every one of them that La Mina was less than two minutes away by car, just one stop beyond his little cafe.

For those who don’t stop by the snack stand, here’s a more precise location. The La Mina Falls trail is located near the Palo Colorado Information Center at PR 191, km 12.2 at the EYNF El Yunque Recreation Area.

Maintained by the US Forest Service, El Yunque is well equipped for eager tourists who have never seen a rainforest. However, there were many people visiting on the day that we dropped by. Cars packed the two parking lots adjacent to the trail and the legal spots on the side of the road. A number of people resorted to parking their cars illegally on the side of the twisty narrow road. Bill and I saw a lot of cars with parking tickets on them; it appeared that the park rangers really enforced the parking zones. We drove a little beyond the parking lot near the trail to La Mina and were rewarded with a legal parking spot.

I wasn’t sure what to expect when we stood at the entrance to the hike to La Mina. I did, however, come prepared for the rain by wearing a bathing suit. If you plan to take this hike or any other at El Yunque, I would recommend wearing a bathing suit or clothes that are okay to get wet. It rains almost every day at the rainforest and there are places where you can wade in the water. On a hot, muggy, steamy day at El Yunque, you might just be tempted to cool off by taking a dip. For the same reasons, I also recommend bringing a towel and wearing shoes with good traction. The trails can get very slippery because of the rain.

Bill and I descended the steep stairs to the trail, which was paved with rocks and even had handrails in some of the steeper areas. It didn’t take long to find out that we were not alone on the trail, which was described as “challenging”. Families with small children passed us. Elderly couples held hands as they negotiated the steep hills. Teens with abundant energy charged down the trail, bellowing with exuberance. We saw more than a couple of people huffing and puffing; near the beginning of our hike, a tired looking mother and son approached us and asked how much further until the end!

Despite the crowds, Bill and I definitely enjoyed the scenery. The hike passes a beautiful rushing river, canopied by lush green vegetation and buttressed by rocks. We saw many waterfalls, which gave us a taste of what was at the end of our hike. Even though it was warm on the day of our visit in mid April, the cool misty rain helped keep the heat from being oppressive.

As we got closer to the falls, we could hear the rushing of water and shrieks of delight. The sound reminded me a little bit of what I’ve heard at amusement parks near water rides. But as we rounded a corner and got a look at the falls, I could tell that this was Mother Nature’s own thrill ride. There were dozens of people there, many of whom were in the water and some of whom had ventured under the waterfall, which fell from about 35 feet above.

I handed my towel to Bill and ventured into the cold refreshing water, suddenly really glad I was wearing a pair of Keen waterproof sandals from L.L. Bean. The sandals protected my feet from the jagged rocks hidden in the water. It was a little slippery going in, but I managed to get about chest deep in the brisk water once I got closer to La Mina Falls. The closer I got to the falls, the more frigid the water became. Nevertheless, it was still crowded, so I didn’t stick around for long. Once I had cooled down from our 40 minute hike, I climbed out of the pool and dried off a bit.

Standing on the bridge over the river, we looked at the side facing away from La Mina and saw more people enjoying the water further down. I didn’t see any places where people could actually swim, but there were plenty of areas where wading was possible.

La Mina Falls: goes down easy but hurts coming back up

As Bill and I hiked to La Mina Falls, I had a pretty easy time of it. Most of the trail to the falls is downhill. According to U.S. Forest Service’s Web site, the path to La Mina Falls is .7 miles (1.2 km) long and descends from 2130 feet (650 meters) to 1640 feet (500 meters). There are some stairs to climb and some sheer drops, but by far, the biggest challenging getting to La Mina Falls were negotiating around the crowds, especially the tour groups.

Of course, all the way to La Mina Falls, I knew we faced a stiff hike back up the trail. All of those stairs we walked down had to be walked up again. Even as we got close to the falls, other hikers warned us that it was tougher walking back. And it was.

I definitely worked up a sweat and paid for my dip in the pool on the way back up the trail. But the worst part about the hike back was when I stepped off the trail to let a large tour group pass and slipped. I ended up landing squarely on my butt. It didn’t hurt that much at the time, but within a few hours, I had a big bruise. Three weeks later, it still hurts if I sit the wrong way.

If you need a rest…

During the 1930s, the Civilian Conservation Corps very kindly built some shelters along this trail. The shelters are suitable for picnics and are made of native stone. You can stop in one for a rest, a packed lunch, or to wait out a rainstorm. Waiting out the storm may be an exercise in futility, of course, since it rains so often at El Yunque and you will likely sweat a lot from the heat and humidity.

If you want to keep going…

The La Mina trail runs into the Big Tree trail. If you don’t want to go back up the La Mina trail, you can keep going across the bridge by the falls and walk on the Big Tree trail, which continues for another .8 miles (1.4 km) and ends at the Big Tree Trail parking lot. It takes about 40 minutes. I might have wanted to continue on the trail, but we had arrived late at the rainforest and didn’t have time. The rainforest closes at 6:00pm, except for those who have camping permits and are in the proper area.

Things to know before you visit

Visiting El Yunque is free of charge, unless you stop at the visitor’s center, which charges $3 per person. If you sign up for a guided tour with the Forest Service, you must pay $5 per person. Personally, I don’t think tours are necessary, but I would advise anyone who visits El Yunque to stay on the trails.

If you plan to hike, wear good quality, comfortable, and preferably waterproof shoes with traction. The trails are often paved and can get slippery from the rain and vegetation. It also helps to be in somewhat decent physical condition, though I’m no athlete and I managed fine.

Consider wearing a bathing suit, especially if you want to swim. Bring a towel, too.

Remember that skin lotions and insect repellent may have a bad effect on the environment, particularly if you get in the water.

Don’t leave your trash in the forest. Surprisingly enough, I did see some litter during our visit. I thought it was a real shame, considering how gorgeous El Yunque is.

Leave the wildlife alone. Don’t kill any animals or pick any plants. There are snakes in El Yunque, but they aren’t poisonous and they play an important role in keeping the habitat in balance.

If you go to La Mina Falls, be prepared to share your space with a lot of people! If you’re hoping for privacy, try to go early in the morning or later in the afternoon.

Keep in mind that the rainforest opens at 7:30am and closes at 6:00pm every day. However, it’s open seven days a week.