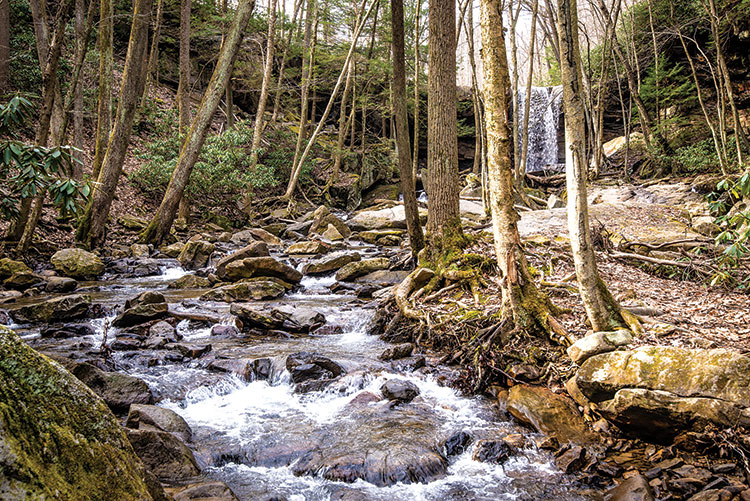 If you’re looking for a scenic hiking trail near Pittsburgh, PA, you don’t need to drive an hour or more to get there. Some of the best hiking trails are the ones not many people know about, and there are many within a stone’s throw of the city. This article will introduce three of these nearby trails in the city’s northern region. Most local outdoors enthusiasts and nature lovers are well aware of hiking locations in the Allegheny County Parks and Pittsburgh Citiparks, but many do not know there are scenic waterfalls in nearby Shaler and Fox Chapel easily accessible from spectacular woodland trails. These are just some of the little-known hiking trails you should check out in the northern Pittsburgh vicinity.

Fall Run Trail
Few people notice the sign for Fall Run Park (a.k.a. Judge D.M. Miller Park) as they drive by it on Route 8 in Shaler. It is tucked away on Fall Run Road, just off the northbound lane and easy to miss. Located about 20 minutes north of Pittsburgh, Fall Run Park offers perhaps the largest and most spectacular waterfall in the immediate Pittsburgh area. The trail itself is a relatively flat 2-mile round-trip hike, meandering along a picturesque creek, nestled within a deep, wooded ravine. The outstanding scenery includes steep, imposing hillside topography towering above the stony creek bed. There are seven wooden bridges that cross Fall Run along the way, offering good vantage points up and down the ravine. About halfway to the waterfall is a very large glacial boulder, forming a unique outcropping that reaches out a third of the way across the creek. The waterfall is most impressive during the spring months orafter a heavy rain when water cascades down the high rock ledge. In the summer months, locals will sometimes cool off in the shallow pool below the falls. There is a long set of wooden steps that take you to the top of the waterfall, where you can walk right to the edge of the cascading stream and watch the water splash down the cliff, showering the shallow pool several feet below. The trail eventually tapers off to a dead end behind a residential area, and you must turn around and head back along the same route.

Fall Run Park is located about 20 minutes north of Pittsburgh in Shaler Township / Glenshaw. Traveling northbound on Rt. 8, it is a right turn onto Fall Run Rd. across the street from the large Harley Davidson shop. From there, a sign at the entrance of the park will guide you down a short road leading to a small parking loop at the trailhead. Fall Run Park is a dog-friendly.

Trillium Trail
The Trillium Trail in Fox Chapel is located on Squaw Run Road in a heavily wooded hilly region, about 25 minutes northeast of Pittsburgh. It encompasses just a portion of the nearly 300 acres of protected parks and conservation lands within the Borough of Fox Chapel. It also features a scenic waterfall, which drains into nearby Stoney Camp Run. The Trillium Trail is a more difficult hike than Fall Run Trail, but is still relatively easy for anyone in moderate physical condition. The hike is a 2.75-mile loop, with a mix of flatlands along the creek, intermediate elevations along the side of the ridge, and a finally a long, steep hill climb that will leave you panting at the summit waterfall. The scenery throughout the hike is sensational, as the hillsides are generously dotted with Hemlocks and Mountain Laurel. The Trillium Trail was once famous for its overabundance of trillium flowers that covered the forest floor, but encroaching deer have thinned the flowers considerably over the years. The wildflowers are making a comeback, however, with the help of specially designed deer ex-closures, which protect select growing areas from foraging deer.

There are two main trailheads with small dirt parking lots along Squaw Run Rd. Driving northbound on Route 28, take the Fox Chapel exit 8 and bear left off the ramp. Turn left onto Fox Chapel Road and drive to the Y intersection. Bear left at the intersection onto Squaw Run Road. The roadsides are densely forested and devoid of any man-made landmarks, so the small lots are quite easy to miss if you are not paying attention. The Trillium Trail does not allow dogs.

Washington’s Landing: North Shore Trail
If you are interested in urban hiking, the trail at Washington’s Landing is a little-known urban oasis in the heart of Pittsburgh. Washington’s Landing is a small historic island on the Allegheny River about 2 miles northeast of downtown Pittsburgh and Point State Park. Also known as Herr’s Island, it is a encompasses 42 acres and is roughly a mile in length. The trail at Washington’s Landing is actually an extension of the North Shore Trail, which is part of the Three Rivers Heritage Trail system that snakes along Pittsburgh’s rivers. This easy walk over a crushed-gravel surface offers scenic river vistas and a spectacular view of downtown Pittsburgh. It takes you through an interesting mix of river shoreline, beautifully landscaped tree lines, manicured gardens, a landscaped business park, a boathouse and rowing complex, a marina, and a small block of upscale townhouses. Although located in the middle of Pittsburgh, Washington’s Landing seems more like an urban oasis, being cut off from the commotion and bustling pace of the surrounding city. There is a surprisingly diverse ecosystem along the trail. Besides the local waterfowl, you can occasionally spot a river otter swimming in the back channel, and there are always numerous opportunities to spot one of the many rabbits that dart across the path. Both ends of the island have small lookout areas where you can sit and view the river scenery. The northern end of the island has a wide panoramic view of the Allegheny River Valley. The southern end has an equally impressive view of downtown Pittsburgh and the historic Strip District.

Because of its location and geography, the small trail at Washington’s Landing is not as well-known as some of the more traveled segments of the Three Rivers Heritage Trail. Because of this, it is usually much less congested than the main North Shore Trail, which sees numerous bicycles, joggers, and walkers. By car, the island is only accessible from a small ramp that connects it to River Avenue on the north shore beside Route 28. Coming from downtown or the Strip District, cross either the 16th Street Bridge or the 31st Street Bridge to enter River Avenue and then onto the access ramp. From Interstate 279 North, you can merge onto Route 28 and take one of the immediate exits for Chestnut Street or East Ohio Street, which can then connect you to River Avenue and the ramp to Washington’s Landing. Parking lots for the trail are found directly under the 31st Street Bridge just after the access ramp and also towards the north end of the island by some public tennis courts. The trail is dog-friendly. The southern tip of Washington’s Landing can also be accessed by foot over a converted railroad bridge and pedestrian ramp that connects directly to the main North Shore Trail.

If you have an interest in American history, there is an added reason to visit Washington’s Landing. The island earned its name from an unlikely emergency landing there by future president George Washington while he was still a young 21-year-old officer serving under the British. On December 29, 1753, Washington spent the night on the uninhabited island with his frontier guide Christopher Gist after their log raft capsized in the Allegheny River. Washington was plunged into the icy waters and nearly drowned. The two men struggled to gain control of their raft among the swift currents and floating ice, luckily drifting to the island before they could be swept farther downriver. If not for the emergency fire they made on the island, George Washington most likely would have died from hypothermia. Washington and his guide were returning back to Virginia from a failed diplomatic mission with the French Army in what was then a disputed wilderness territory. There is a historic sign marker at the north edge of the island that commemorates the event.

If you are a fan of geocaching ( http://www.geocaching.com/default.aspx , the recreational outdoor GPS treasure-hunting game), you will be happy to know that all three of the trails mentioned here have at least one registered geocache along the route and several others caches nearby.